The Revival of Philosemitism in Europe

beside sincere Holocaust remembrance and vigilance against Antisemitism,
we  should pay more attention to rich traditions and future potentials of Philosemitism;
good coexistence, cooperation and friendships between Jews and gentiles – in the right proportions

Our Philosemitism Forum’s – and this website’s – purpose is not at all to forget the Holocaust or deny the existence of Antisemitism**; we do not say that Philosemitism is the ruling sentiment. What we do say is that, we should keep in mind and foster the good sides of Jewish-gentile coexistence too, because they are also true, and they are the hope.

Yes, this website is about Philosemitism – a word almost forgotten – and not about Antisemitism**, everywhere spoken about. Philosemitism has many meanings, even contradictory ones, we selected and shall speak about the meaning of good coexistence, mutual respect and interest in each other, dialogue, useful cooperation and even friendship between Jews and non Jews.***             [Attention: we’ve redefined the word Philosemitism; we use its positive meanings only – as Wikipedia also does today – and ousted the old negative versions; the usage of the old Ph word had faded out anyway. ]

This website is the internet gateway of Philosemitism and our relating projects; researching, re-introducing and reviving in Europe this word and this concept. Our practical goal is, to raise awareness of the better sides of coexistence between Jews and non-Jews – we call Philosemitism – and to promote it in practice; first in East-Central Europe then in entire Europe. 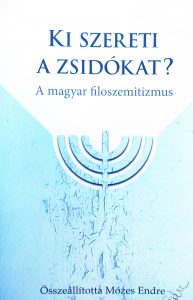 We are initiating a series of research projects and books in Europe to promote this concept.
Our greatest achievement till now is the first such book published in 2014:  “Ki szereti a zsidókat? A magyar filoszemitizmus”  /  – Who likes the Jews? The Hungarian Philosemitism (edited and partly written by the undersigned Endre MOZES)***. To my own writings I invited 25 renowned contemporary Hungarian coauthors who wrote about as many aspects of the subject.****

The English translation of the book has started, the English edition scheduled for the second half of 2019. Research takes place about further similar projects in that region , with outstanding partners in Poland the Czech and Slovak Republics; and recently also into the past and present of Philosemitism (in its revised sense) in some Western European countries  too.

The first reaction to our projects is, usually, surprise: Why Philosemitism??? We hear more about Antisemitism, don’t we?
Continuation:   True, both Antisemitism and Philosemitism do exist. But Antisemitism gets much attention, so Philosemitism has to be fostered in order to retain the right proportion, otherwise only the evil side will be known and remembered.
It’s wrong when we are silent and leave the whole stage to past and present antisemite Jew-haters. Wrong, even if we keep Antisemitism on the stage only to fight against it, to point out its ugliness, because limelight is the lifeline of Antisemitism; and they don’t mind at all to be shown as negative heroes.

So let Philosemitism and its true stories of coexistence, of life together, take over the public discourse !
This is one more way to counter Antisemitism, not less effective than frontal fight.

And, as we said, beside sincere Holocaust remembrance and due vigilance against Antisemitism we should pay more attention to the rich traditions and future potentials of Philosemitism; good coexistence and friendships, as well.  ’We’ means here Jews and non-Jews alike

Our book about Philosemitism in Hungary: Who likes the Jews? The Hungarian Philosemitism****) is in Hungarian, and is mostly Hungary-specific. But its guiding concept and structure (see Content and Structure ), the results of several years research,  serve as universal know-how for similar research work and books in further countries.

In the beginning of research we reviewed the diverse, sometimes even contradictory former definitions  of  Philosemitism, we redefined it as good coexistence, and are refilling it since with positive human content (see also our What is Philosemitism? title). Our next objective is to further revive and nurture this concept of co-existential Philosemitism in the public thinking and discourse, in everyday life and in education.

There is some progress towards reintroducing Philosemitism to everyday language and practice. During the research and after the publication two popular scientific conferences/workshops were held in Hungary. The book’s 25 co-authors and dozens of media reviewers are also spreading today our co-existential Philosemitism concept.
A Google search with the Hungarian word „filoszemitizmus” shows 2800 hits; the first item and 8 ones on the first page are related to our book. But still a long way to go until Philosemitism will be a household word. 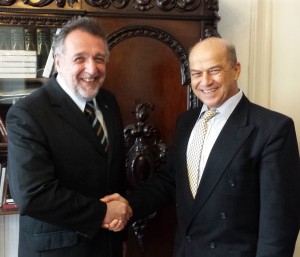 We have discussions with the President of the Hungarian Jewry’s top organization, MAZSIHISZ, and also with the State Secretariat responsible for Jewish affairs in the Prime Minister’s office and good understandings have been reached. We submitted Proposals for the implementation of these ideas, in academy, in media and first of all in education.

Our next central goal is to extend the concept to further East-Central European countries. We started to study, together with local universities and other institutions, the national and transnational history and present-future prospects of good coexistence of Non-Jews and Jews in this region, and are initiating similar projects and books in Poland, Czechia, Slovakia, later in Ukraine, Romania, Lithuania and more. Most of the Holocaust took place in these countries, but also most of the historic coexistence with Jews.
After my visit to Poland in April 2016, where I had promising meetings with leading Polish historians, researchers and thinkers in Cracow and Warsaw, we are moving ahead with the Content and Structure of the cntraversial but important book ‘Who likes the Jews? Philosemitism in Poland’, both in Polish and in English.
Our target is to research and to describe these countries’ Philo- past, and prospects for a better future. Our Hungarian Philosemitism project and book serve as pilot project for this program. An international conference is planned on the subject. The program is being discussed with the leaders of Jewish communities in these countries.

We believe that the Philosemitism concept can be helpful in Holocaust remembrance and education too. We believe that Holocaust should be remembered and taught not in itself, but together with Philosemitism; teaching also facts and ideas of fair coexistence, including life-saving efforts during the Holocaust.
Both Jews and entire peoples will be better understood this way; Holocaust remembrance and education will become more balanced, more human and easier to teach and to learn – for non-Jews and Jews alike. We have approached IHRA (International Holocaust Remembrance Alliance) with this idea.

This English website www.philosemitism.com , its Hungarian predecessor www.filoszemitizmus.com and coming similar sites in further languages will be the Internet home of our international New Philosemitism Forum.

Philosemitism has something to do with Israel too. For example Take-A-Pen ***** is an international grassroots organization acting for telling the truth about Israel since 2001, www.takeapen.org . Its most devoted volunteers have been mostly Israel loving gentiles, in 18 languages, in more than 60 countries…
(EM)

** Out of the numerous existing spellings we knowingly prefer ‘Antisemitism’ and ‘Philosemitism’.